The Lewis Carroll book ‘Alice’s Adventures in Wonderland’ (1865) and its sequel ‘Alice Through the Looking Glass’ (1871) have endured as favourites of children and adults alike, thanks in part to their whimsical characters in fantastical settings.

The behaviours of these characters are often considered to be out of the ordinary, with some even having medical conditions named after them. Some of their actions may suggest that the characters were suffering from various mental health illnesses, which was still very much stigmatised at the time the books were written. This blog will explore some of these, and use both medical history and advances in the diagnosis and understanding of mental illness, exploring some of the character’s actions in the adventures. 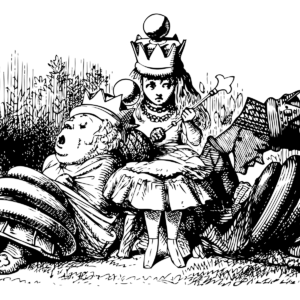 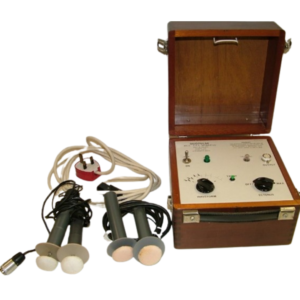 ‘I can’t explain myself, I’m afraid, Sir,” said Alice, “because I am not myself, you see’.

One of the most intriguing occurrences that happens to Alice throughout her adventures is her frequent changes in size, from the size of a mouse to as large as a house. The popularity of the book has meant that the neurological condition Dysmetropsia, which causes distortion of perception, has been labelled as ‘Alice in Wonderland Syndrome’ (AIWS). The condition is also known as Todd’s Syndrome after Dr John Todd, a consultant psychiatrist at High Royds Hospital in Menston, West Yorkshire.

It is thought that AIWS is triggered by migraines in some patients, with Lewis Carroll himself being a frequent sufferer of migraines, which led Dr Todd to speculate that Carroll had used his own experiences with distorted perception in the book. The Thackray collection includes many objects donated from High Royds, the former psychiatric hospital, including this Electron Duopulse machine used for Electroconvulsive therapy (ECT). ECT is a controversial treatment, where electric currents are passed through the brain to intentionally cause seizures to provide relief from mental disorders. The process continues to divide opinion on its ethical use, where informed consent must now be sought. 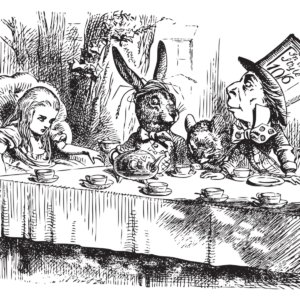 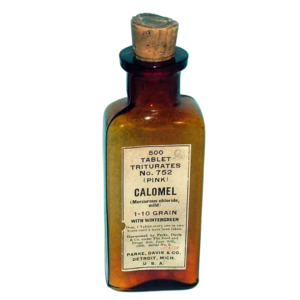 ‘There is a place, like no place on earth. A land full of wonder, mystery, and danger. Some say, to survive it, you need to be as mad as a hatter. Which, luckily, I am.’

The Mad Hatter’s erratic behaviour has long been identified with mercury poisoning or Erethism; mercury was traditionally used by hat makers to stabilise wool, and many were poisoned through inhaling the toxic vapours. Now known for its toxicity, mercury has a long history of use in medicine, not least being used in thermometers and sphygmomanometers (used to measure blood pressure). Calomel, a white powdered variant of mercury was used widely as a purgative and even added to powders to help teething babies. Both pills and ointments made from mercury were used to attempt to treat syphilis. Mercury poisoning can cause tremors, memory loss, headaches, emotional instability, and insomnia. Long term problems associated with mercury include damage to the kidneys, lungs and nervous, digestive and immune systems. 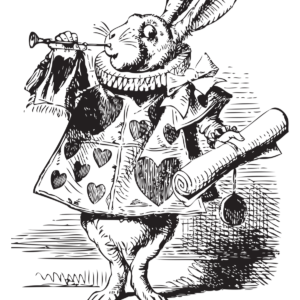 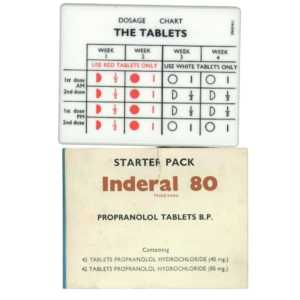 The White Rabbit’s skittish behaviour, adherence to rules and constant fear of being late, for a very important date, could today be thought of to reflect some of the symptoms of Generalised Anxiety Disorder (GAD), which affects up to 5% of the population of the UK.

GAD causes sufferers to feel anxious about a range of issues and situations and can be different from person to person. Cognitive Behavioural Therapy (CBT) can help to control anxious feelings in triggering situations. Medicines called selective serotonin reuptake inhibitors (SSRIs) such as Sertraline can be prescribed by GPs to increase the levels of serotonin in the brain and help to ease the symptoms of both anxiety and depression, while beta-blockers such as Propranolol can help to alleviate the physical effects of a panic attack. 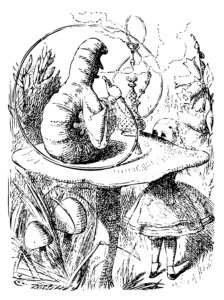 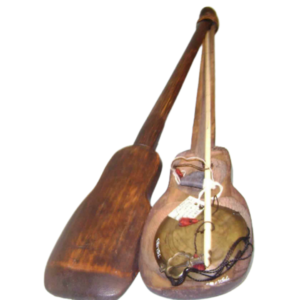 ‘It is wrong from beginning to end’.

The character of the caterpillar is depicted as sitting on top of a large mushroom, inhaling from a hookah pipe. While it is debatable what substance he was actually smoking in the pipe, once suggestion is that he was inhaling opium. Opium addiction was rife in Victorian England, thanks in part to its ready availability from chemists and its use in remedies from painkillers to treatment for coughs and colds. Opium, derived from the Opium Poppy seedpods, acts as a depressant on the central nervous system, blocking the perception of pain.

The use of opium was thought to free the mind and encourage creativity, creating a feeling of euphoria, with Romantic-era authors and artists extolling its virtues. Opium dens, where the substance could be bought and sold, appeared in London in the 1860s where scales such as these Chinese examples from our collection were used to weigh out opium for smoking. Opium is a highly addictive substance and the body builds up a tolerance to it, meaning higher and higher doses are required to achieve the same effects. Opium use causes nausea, confusion and drowsiness, and withdrawal symptoms include depression, anxiety, muscle aches, vomiting, stomach cramps and insomnia. It is a Class A drug in the UK and the production, prescription and use are now highly regulated. 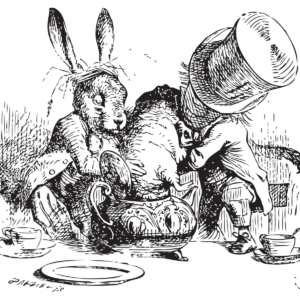 ‘The March Hare will be much the most interesting, and perhaps as this is May it won’t be raving mad – at least not so mad as it was in March.’

Tenniel drew a straw in his hat, a common way of depicting madness in Victorian times. March is often the time that hares go ‘mad’ during their mating season and so the character has become a common British phrase ‘as mad as a March hare’. The object is lithium, used to historically to treat schizophrenic disorders. 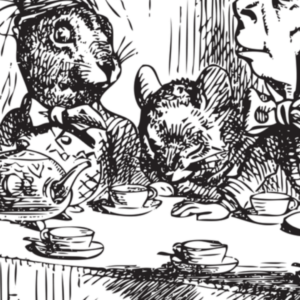 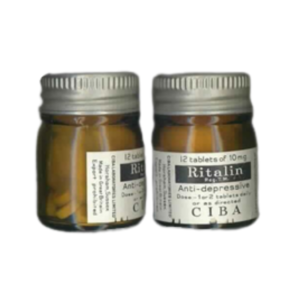 ‘You might just as well say, ” added the Dormouse, who seemed to be talking in his sleep, “that ‘I breathe when I sleep’ is the same thing as ‘I sleep when I breathe’!’

It seems that the Dormouse suffers from a condition known as narcolepsy, symptoms include random attacks of sleep and overwhelming daytime drowsiness – treatments include Ritalin.